Yet another busy week of assignments but I have a new project to post!  Mainly because it's a two for the price of one- it's modidfied from an assignment/ student worksheet that I am making.  Today's project is to make a pair of DNA earrings (or a DNA key chain or window dangle etc).  But first, allow the science geek in me to give you a quick run through on the wonders of deoxyribonucleic acid, better known as DNA (because saying deoxyribonucleic acid too fast is likely to cause tongue dislocations in non-professionals like myself).

DNA is the 'building block of life'.  Nearly every cell in our bodies contains a nucleus- while everyone knows red blood cells don't have nuclei, (plural of nucleus), did you know that mature lens fiber cells in your eye also don't have nuclei?  I didn't before writing this.  Back in the distant past when your parents were doing things you don't want to think about, each parent contributed half of their genetic material to form you.  The exact nature of which I won't go into here- if you are interested in how a cell divides to sort a full human's complement of DNA into half a complement, then go read up on meiosis.  And if you want to read about how those two halves of DNA meet, then there are large portions of the internet dedicated to that sort of thing, so I won't go into it here!

Inside your nuclei you have 23 pairs of chromosomes- 22 autosomes and two sex chromosomes (XX if you are a girl, XY if you are a boy generally).  Each chromosome is made up of a really, really, really, really tightly wrapped length of a single piece of DNA.  The picture below (that I got from this website that goes into a bit more detail than I will here if you are interested in reading more) isn't too bad at showing how it works.  A single piece of DNA (that looks like a twisted ladder), the strand is wrapped around proteins called histones.  These histones are then twisted in turn to form a slightly thicker rope of DNA which is then wrapped further until you end up with a chromosome. 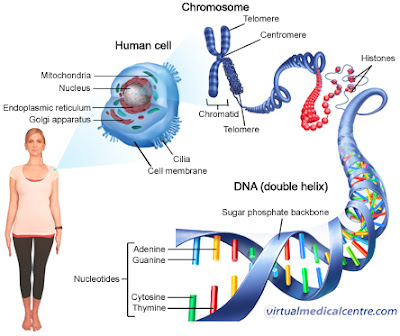 DNA is a polymer, which is a fancy way of saying it is made up of lots of individual units joined together.
These individual units are called nucleotides.  Each nucleotide is made of three parts, a sugar (called deoxyribose), a phosphate group and a nitrogen base.  The nucleotides join together with the sugar group of one joining to the phosphate group of another and so on.  These are the two handrails of the DNA ladder, or more commonly referred to as the sugar phosphate backbone.  A DNA molecule is made of two strands of nuclotide polymers that are joined in the middle at the nitrogen bases- the rungs of the ladder.

There are four different nucleotides found in DNA and these four nucleotides are common to all known life on earth: adenine, guanine, thymine and cytosine.  Adenine and thymine will always pair together in a DNA molecule and guanine and cytosine will always pair together.  The jury is out as to whether E.T. will have the same bases or not- it largely depends on if you believe that the system developed here on earth, which would mean that E.T. would probably have a totally different system, or if life actually came to earth from elsewhere in the universe on an asteroid or comet, in which case who knows.  Or it depends on what sort of Sci-fi you like to read or watch- Star Trek yes, something else possibly not!

OK, that's enough of me boring you for now, lets get on with making our pretty shiny things.  First off the material list.  You will need: 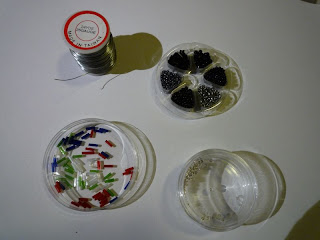 STEP 1
Work out how many beads you will need of each colour and type to make a DNA molecule.  The instructions below are for a piece 12 nucleotides long which will produce a nice twist.  Use a longer wire and more beads if you want to make something longer.  You will also need a 90 cm length of fine wire.
Sugar
Phosphate
Nitrogen bases     - adenine
- guanine
- thymine
- cytosine

STEP 1
Take a 90 cm length of wire and find the middle point.  Thread onto the wire two bases (long skinny beads), a sugar and a phosphate and move them to the middle of the wire.


STEP2
Now add a sugar and the next base onto each end of the wire. 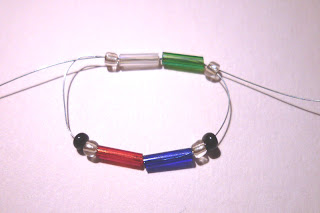 STEP 4
Add a phosphate, a sugar and the next base pair to both ends of the wire. 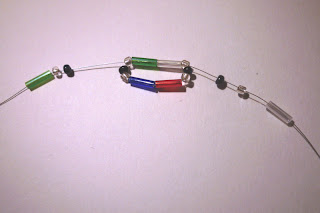 STEP 5
Thread the ends of the wires through the base and the sugar on the opposite strand as you did in step 3.  Gently pull on wires until beads are snuggly against each other. 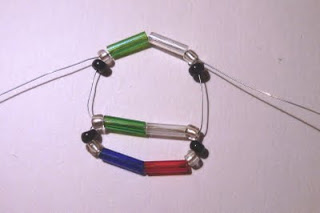 STEP 6
Repeat step 4 and 5 until your DNA ladder is 12 bases long.  On the last base leave a gap in the wires between the two nucleotide bases. 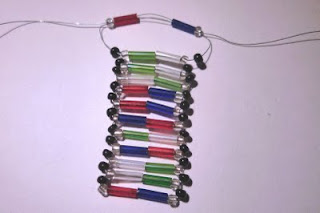 STEP 7
Use something thin like a toothpick, straightened paperclip or the tip of a pencil to twist the wire around twice.  This makes a loop that you can hang an earring hook or a keychain loop on. 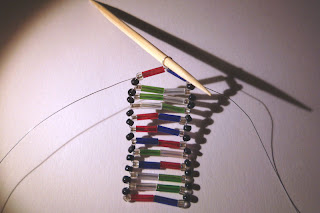 STEP 8
Take the ends of the wires and thread them down through the phosphate beads to the bottom.  This strengthens your DNA molecule. 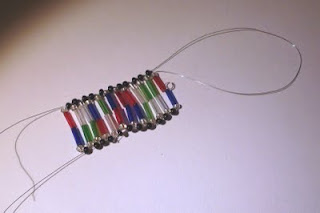 STEP 9
Trim the ends of the wire close to your DNA ladder. 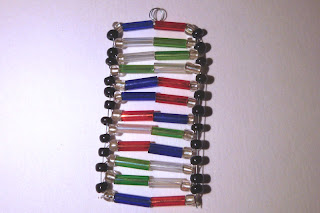 STEP 9
Give your DNA molecule a gentle anticlockwise twist and attach an earring hook, key chain ring or tie it to some fishing line if you wish. 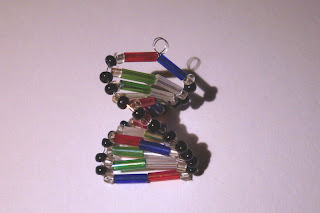 Isn't that sweet?  These instructions are rewritten from here.  I'll spare you the educational questions I'll adding to my assignment!  But fun factoid- human chromosomes are from about 50 Mbp (that's 50,000,000 base pairs) to 250 Mbp in length.  The molecule above is 12 base pairs long.  I'll let you figure out how long and how many beads you'd need to make one of these babies to scale!
Posted by Geeky Goblin at 19:07

I love comments! But spammers, not so much. Hence why it will take a day or so for comments to appear.

In another life I was a mad scientist, working away in a genetics lab, sadly not making Triffids. Now I'm a science teacher who dabbles in crafts of all sorts, sometimes with more success than others.

This work is licensed under a Creative Commons Attribution-NonCommercial-ShareAlike 3.0 Unported License